I recently ran a poll to see which cover would look best for my book.

My friend Martin recommended this. I thought I had the perfect cover picked out, but one look and he wasn’t sure. He suggested I put the covers up for a vote and see what family and friends thought about them. 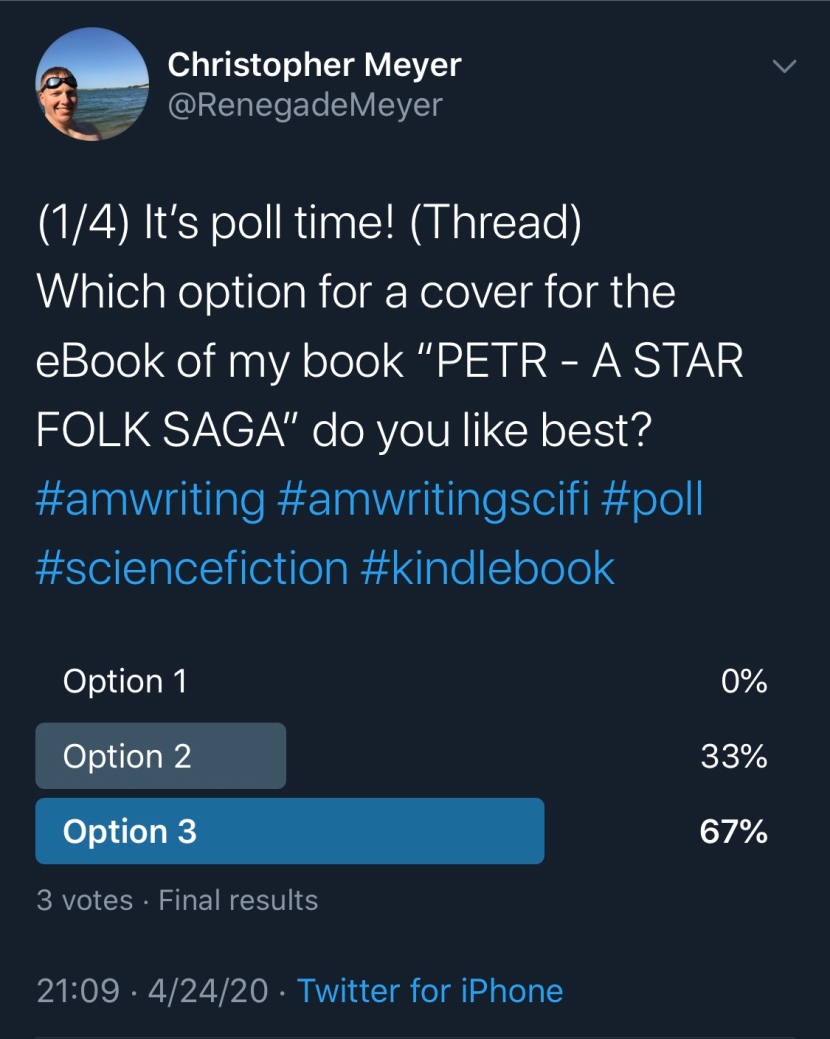 Option 2 came out on top with 4 votes.

Option 1 was close behind with 3.

And Option 3 came in last with 2 votes.

The plus is it’s unique and makes the books stand out. The drawback is it costs monies.

I do wonder, however, if the Twitter poll had more exposure if Option 3 would have received more votes.

But I’m driving on. The cover for the eBook and print book have been finalized. I am working on more marketing and getting my book into the hands of reviewers prior to launch. Plan on seeing on a launch date soon!

I posted a poll on Twitter for which cover I should go with for the eBook of my book “PETR – A STAR FOLK SAGA”. Head over and vote!

(1/4) It’s poll time! (Thread)
Which option for a cover for the eBook of my book “PETR – A STAR FOLK SAGA” do you like best?#amwriting #amwritingscifi #poll #sciencefiction #kindlebook

I have decided to self-publish my book “PETR: A STAR FOLK SAGA” through Amazon’s Kindle Direct Publishing service.

So I’ve dived in working on perfecting the ms for kindle publishing. It’s been frustrating at times. I think I’m done and after another review I find a host of tiny mistakes and I have to go back and correct them before I upload the ms to KDP again.

Like most people in the world these days I’m teleworking from home while my children’s schools are out.

However, the Coronavirus has brought the shutdown of my gym, and also like most people I am relegated to workouts at home in addition to my running outside.

Normally I do the American Sniper Workout from T-Nation. Unlike the program I don’t split it up AM/PM, I just do it all whenever I go to the gym. I’ve had to modify it as of yesterday as that’s when my gym was in full shutdown. Maybe you will find this helpful as you telework/self-quarantine for the next few weeks/months. 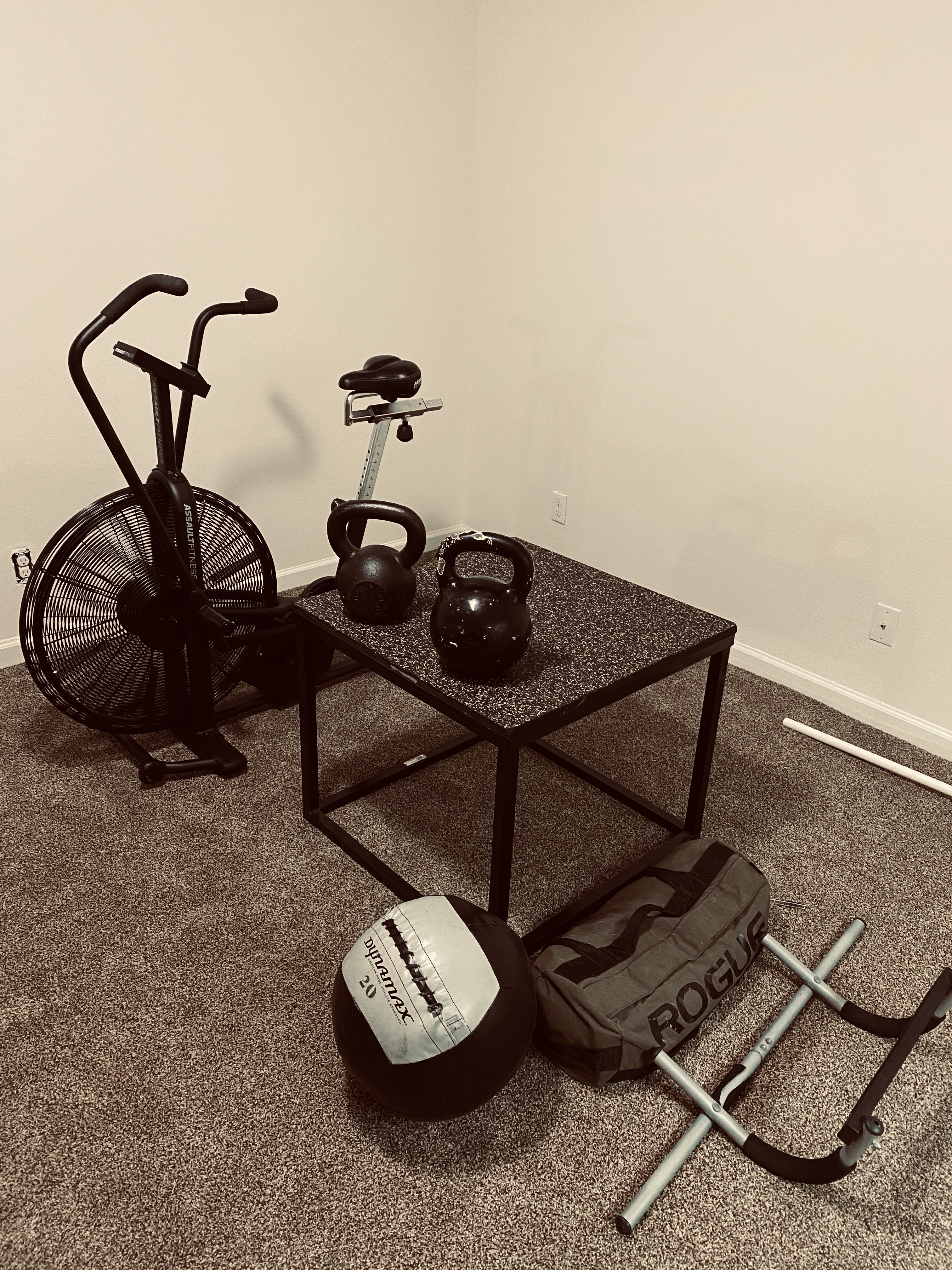 It’s been over a month since I had my last call-in with my editor. Since then I’ve queryed over forty agents – and the querying continues.

Of those forty, five have provided a negative response.

According to all the blogs and articles by those in the industry, including agents themselves, it’s an average of 6-8 weeks until they respond, IF they respond.

Each agent receives hundreds, if not thousands, of queries each day.

So mine is one in a roiling sea of manuscripts.

But, to quote Winston Churchill, “We are all worms, but I do believe that I am a glow-worm.”

And so I will query on, and I shall never surrender.

The Global Defense Initiative hasn’t built a space laser yet. There’s no tiberium…

On the bright side, I am working with my editor to craft a query letter to agents for my novel, tentatively titled “PETR: A STAR FOLK SAGA”. I’ll be querying agents within the next week or two. I’m extremely excited to take the next step in my writing journey.

One of the big things I am having trouble with writing is delving deeper into the details. In my mind I see my story and then I write it out how I see it, more like a movie with a few more details, specifically inside Petr’s mind.

However each iteration of editing my editor has remarked that more detail is required. Even my beta readers have mentioned that more dialogue to move the story along would be better.

So I keep plugging away. In the darkness of the not-so-far future I expect publication.

Written May 2016.
From one of the Weekly Writing Prompts at Writer’s Digest.
It’s 50 years in the future, and the world is at war. Luckily, when the nuclear bombs dropped, you had a bomb shelter under your house to hide out in. When your monitors tell you it’s safe to go outside a year later, what do you find? Who is still alive? Have the plants and animals been affected by the radiation? What will you do now that the world has totally changed?

I wake to the shrill chime of the monitor inset within the bunker’s triple thick metal door. Springing from the stiff mattress atop the thin metal bed frame, I see the monitor is green –glorious, spirit-lifting green! After a year of silent red, the green lights are a joyous sight. Hetzer, my Norwegian Elkhound, hops up from his spot next to my bed, and he barks at the door monitor’s incessant ringing.

Part of me doesn’t believe it. Something deep down tells me this isn’t real. My heart leaps as I close the distance and read the monitor’s glowing face.

The air up above is clean.

The radiation is gone.

It’s safe to come out.

Silencing the monitor’s chime I turn and look at Hetzer with a smile.

Hetzer’s happy bark and wagging tail is all the confirmation I need.

I trot back over to the metal framed bed and pick up the cargo pants I tossed there the night before, and pull on a dirty t-shirt that used to be white. Plopping down on the stiff mattress I pull my gray hiking boots out from under the bed. The socks I wore two days ago – or was it a week ago? – are stuffed inside the boots, and I pull them on before stuffing my feet into the boots. With boots tied I make my way back across the drab, gray bunker and to the door.

Always ready, I grab the semi-automatic rifle hanging just next to the door. The last days before the bombs dropped were dark, and Hetzer and I only survived because of my diligence and a few well-placed shots with my rifle. Many others were not so fortunate. Too many. I pick up two magazines full of ammunition off the floor and slide them into the right cargo pocket of my pants.

Then, I place my hand on the door’s latch. I could have had a digital system installed, but if that had failed I would have been stuck in thisbunker with no way to escape. The giant wheel above the door monitor squeals and screeches from a year of disuse as I turn it. Behind me, Hetzer shuffles back and forth, anxious to leave the tight confines of the bunker.

One last, loud screech, and the door pops open.

I hold my breath, hoping that the bunker’s sensors are telling the truth, but warring with the dread that the sensors failed and in the next few seconds I would be dead.

Suddenly, a cool breeze wafted into the bunker, bringing with it fresh air.

The smell of the fresh was delicious, the sensation on my nostrils and in mouth like lemon gelato on a hot summer day.

I take the first step out the door and up the stairs. Hetzer, though so excited he can barely keep it contained in his furry body, waits for me, his master, his Alpha, to go first, and then trails close at my heels. As I ascend the steps I see above us the sky is black and clear. Billions of stars twinkle in the night sky, and the full moon is at its apex.

I reach the zenith of the stairs, my heart fluttering with excitement.

I am greeted by destruction.

The small neighborhood I lived in is gone. The only proof there ever was a neighborhood here are the foundations of homes and roads being slowly overtaken by nature. My house is gone, too. Only the bunker, what used to be the basement, is all the remains of the place I called home for so many years.

The neighborhood I lived in sat atop a hill overlooking most of the city, and now I stare at what remains. What was once the epitome of suburbia is now an empty, grass covered field. Here and there the crumbling skeletons of a few buildings remains. Far in the distance at the city’s heart stand the rotted, bombed out corpses of skyscrapers.

The silence overwhelms and presses in on me. Though Hetzer stands loyal by my side I feel the crushing weight of loneliness.

Another emotion wells up within me: hope.

Other people had to make it to other bunkers, I assume as the logical portion of my mind takes over. There have to be others out there.

With that shred of optimism beginning to take root and grow within me I step forth into this new land, Hetzer always beside me.

THE RED RENEGADE
Blog at WordPress.com.